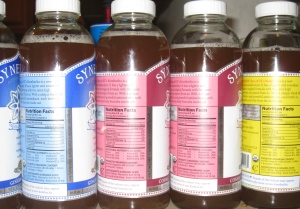 This isn’t what it looks like. I did not splurge at Whole Foods on several bottles of kombucha, the ancient Eastern elixir. Nope. This is my kombucha, made from my baby. It’s been two weeks since I concocted my first batch, and it’s been brewing away in a dark cabinet. This afternoon, I tasted it, and it’s ready.

I bottled my brew in old glass bottles from Whole Foods. Yeah, I know–not the most exciting picture today. Also, not a very father-y picture, either. (Although, “brewing” does bespeak dad.)

What else can I say? I’m really excited about my ability to make things. I had been worried that kombucha was hard and messy to make. Absolutely not the case. It’s easy…and any leftover culture (that you don’t want to keep for your next batch) can be used in the garden. I get the sense that home-brewed kombucha is more potent than store-bought.

Tonight I’m preparing a new batch of kombucha–this one with green tea. (The first batch was made with English Breakfast.) We’ll see in two weeks how it tastes. I’m also starting a new sourdough loaf tonight–the first one was good, but needed more salt.

Ok, this is a pretty boring post as I’ve spent most of the day preparing for a week of intense meetings. Hope you all had a great Father’s Day.